The nameless series (I)

Well, yeah! I’m working on a series that has no name. It wasn’t even meant to be a series in the beginning. It was supposed to a be just a crime fantasy story. But I had so much fun working on it, that I knew I had to go back then sometimes. There are only two stories so far:

There will be more “Nadír investigations” in magic lands with fantastic creatures. But that’s a story for the next week. 😉 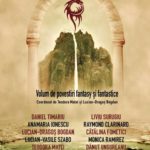