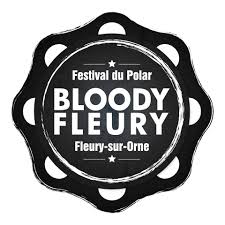 If you’ve never heard of Fleury-sur-Orne, don’t worry. Neither did I. I mean, untill I was invited to their Bloody Fleury crime festival. I then searched it on the map and found out that it was far away in Normandie. Apparently, they’ve found a dead woman in a trunk in Lyon and they needed me to talk about the case. So, without fruther ado, I packed my bags and was on my way to France.

I left Alba Iulia at 2 A.M. and reached my destination ar 3 P.M. (4 P.M. in Romania), looking like I was just pulled out from a trunk myself.  Still, I succeded to smile and talk a sort of French all Friday afternoon, till I fell down on a chair and almost got asleep. Fortunatelly, Isabelle and Sophia pulled me up and dragged me to diner, otherwise I might have been sleeping their even now. I told them even vampires need some sleep and promised them to be in shape the next day

I had no other choice, for on Saturday I needed to go to a panel and talk about my novel, The Trunk, co-written with Jacky Schwartzmann. I warned Jacky that the burden was his. I was just the foreign writer coming from the end of the world, an exotic figure, barely speaking French and ready to say the most stupid things. That meant I was relying on him to do the job properly.

I also signed some autographs, for the French have come to see the hairy ape from Transylvannia. Some of them have read the book and were kind enough to say they’ve liked it and ask me when am I going to be published again in France. I explained them that I only had a tiny bit of a problem, that being said no publisher has yet expressed interest in translating my work. But as soon as this would be settled up, they’ll be enjoying my masterpieces.

I was surprised to hear a “Bună ziua!” (“Hello!” in Romanian) from a very beautiful woman. It was Ada, a Romanian settled in Normandie and I was glad to talk to her. At least I got the chance to speak properly, using my native language, not trying to look like I know French (even though some told me that I have a far more elaborate vocabulary than a comics screenwriter).

To make a long story short, I loved Bloody Fleury. Nice, warm people, ready to make a joke out of anything, and a very articulate and nice festival. My many thanks go to Isabelle (she really helped me integrate), Sophia, the kind bookseller, Jacky, the two Benoît, Elise, Morgane and, last but not least, Sylvain. Love you all, guys, you were terrific!