I just love returning Home, to my roots. Over there, the Universe of the Frontier is one of the places I feel most comfortable to be in. We grew up together since I was 6. At 14, I started a comics trilogy, but I only finished the first two parts. You can find some refferences of them in the When the Red Feathers Cry novel. The time has come to pick up the ideas, to turn them so they match what has become of this universe and to write everything down. I’ve already begun working on the first book.

Some of you were expecting the fourth installment of the Homeless series last year, but I only gave you the spin-off The Trunk co-written with Jacky Schwartzmann. Well, this year you’ll have the promissed book. Homeless 4 is in progress and Dinu is already caught up in a net of deaths that look suspicious. The worst part is that he can’t rely on the help of his police friends, Duca and Bintintan.

I haven’t started yet working on the third installment of the Book of Chaos series. I’m still trying to figure out the plot for each of the numerous characters. Things got complex and I have to pay attention to details, but I’ll start writing sometime this year.

I have some good news and some bad news for my romance fans. The bad news is that I don’t promise a new book for 2020 (but I’m not saying it will surely NOT BE one). The good news is that I have an idea for it and I will start working on it this year. It will be a bit different than the others; actually, this is one of the reasons I need more time to prepare it.

I also have plans for a new crime novel – a slightly different approach than the one on the Homeless series. If it will prove succesfull, it may turn out as a new series. For now, I got some bits of ideas and I’m designing the plot.

Alongside Teodora Matei, we plan to make a new anthology – this time a noir one. We also consider starting the project for the sequel of A Strager in the Assert Kingdom. If things go as planned, we might start working on it this year.

Still, what I really want for 2020 is to get back to the roots, to return Home. This means dedicating more time to my dear world, science fiction. I also hope I’ll carry on the project that I’ve started with the “Lucian Blaga” Alba County Library – the Science Fiction, Fantasy & Horror Club Alba.

And, of course, I intend to be present at the East European Comic Con Bucharest, Transylvania Comic Con Cluj Napoca and Bookfest Timișoara (alongside my good friends Teodora Matei and Daniel Timariu) and to go to as many fairs and events as possible. 😉 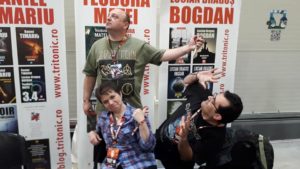